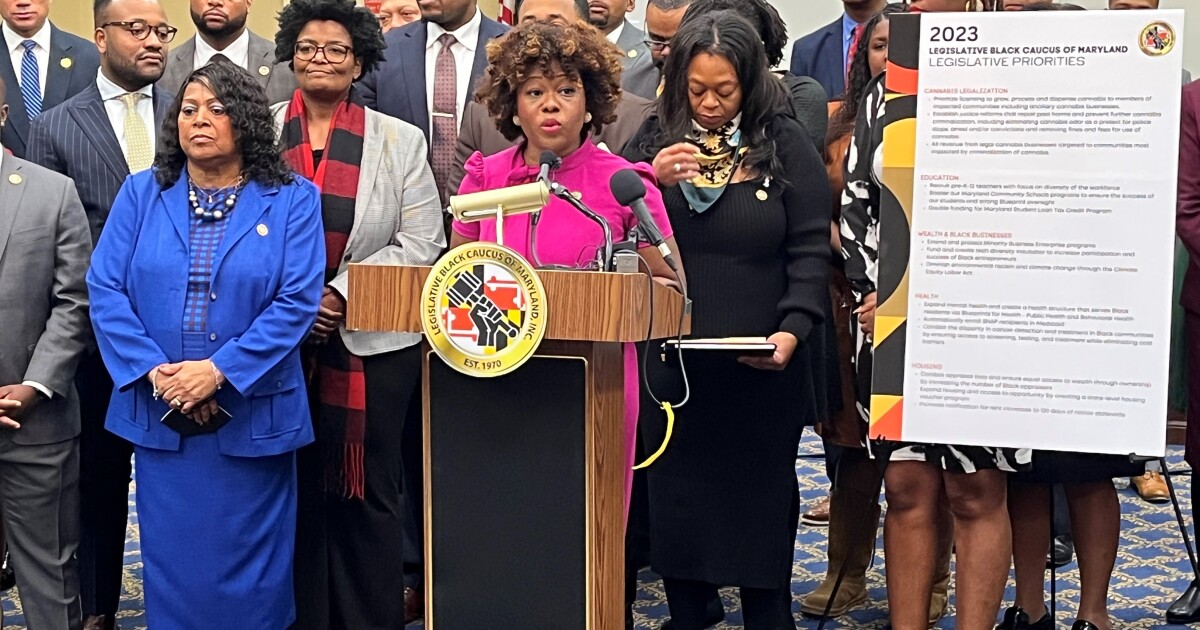 For the first time in 53 years, members of the Legislative Black Caucus of Maryland will be voting on bills under the state’s first Black governor, Wes Moore. The Legislative Black Caucus was founded in 1970 by 17 legislators who tasked themselves to ensure that Black residents in Maryland were “equally protected and befitted by the promises of life, liberty and the pursuit of happiness” as promised by the U.S. Constitution.

Decades later, its membership has grown to 64 legislators, a third of Maryland’s entire General Assembly. Its members claim it’s among the largest caucus of its kind nationwide. Gov. Moore’s victory last fall was not only historic as the third Black person elected governor in U.S. history, but the Democrat is working with a friendly majority of lawmakers pushing similar priorities, including caucus members.

Among the priorities for Black Caucus members this year is implementing the legalization of recreational marijuana, which was approved by Maryland voters during the same election that Moore won. Lawmakers say they want to ensure that legalization unfolds equitably, not just left to market forces.

“We have a legal and moral obligation to ensure that Black people across Maryland who have borne the brunt of the criminalization under prohibition are now put in a position where their damage is restored and we create no more future harm,” said Baltimore Democratic State Sen. Jill Carter during a press conference late Wednesday morning in Annapolis.

Maryland courts have been divided on this issue, she noted. Just last year, Maryland’s Court of Appeals ruled officers could stop someone based on the scent of marijuana in the air, but had to end that stop if they could not quickly determine whether they possessed more than 10 grams of the drug — the definition of illegal possession at that time.

Two years prior, the state high court – now named the Maryland Supreme Court after voters approved a referendum calling for the switch – ruled police could not arrest anyone simply for smelling of marijuana.

Carter says without new clarification, Black residents will continue to be stopped and searched by law enforcement at higher numbers.

“In 2021 Black Marylanders were 41% of all traffic stops, despite being only 31% of the state’s population,” Carter explained to reporters. “And probable cause was used for 67% of all searches of Black people.”

“The African American community has the highest death and shortest survival rate of any race or ethnic group for most cancers,” said Democratic Del. Karen Toles of Prince George’s County.

To address that disparity, Toles says they seek expansion of biomarker testing.

“Biomarker testing is a precision medicine that uses targeted measures like a person’s genes and proteins to inform diagnosis, prognosis, and treatment for cancer,” Toles told reporters. “We seek to expand it across the state for Black residents by requiring insurance to cover biomarker testing.”

Baltimore Democratic Del. Robbyn Lewis has a bill that calls for a broad study of how public health services are delivered in the state.

“The bill requires an assessment of the state’s response to the Covid-19 pandemic and other public health emergencies,” Lewis explained. “We’ll also look at overdose deaths, which have a disproportionate impact in the Black community. We’ll look at maternal mortality disparities. Black women in Maryland have the highest rate of maternal mortality and that should end.”